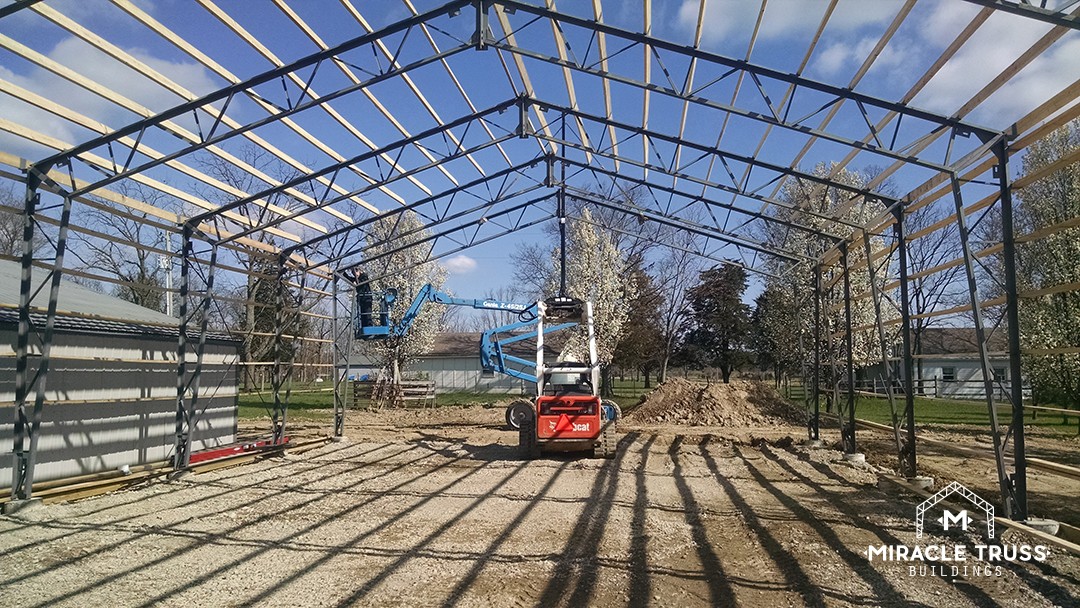 They’re one of the simplest types of agricultural construction, and they’ve been used in the United States since the design was pioneered in the 1930s. Pole barns were originally large buildings mostly made of wood that were put up starting with – you guessed it – vertical wooden poles set in the ground. These poles were usually set about 8 feet apart.

What made them appealing to the agricultural community nearly 90 years ago is still what keeps them popular today. Pole barns can be quickly and economically built. One of the biggest cost-savings comes from not needing a foundation.

Utility poles made perfect building supplies for these structures, and they were in plentiful supply. Their diameter provided ample support for the considerable weight of a traditional roof made with joists, rafters, gable studs, and the ridge beam.

As the barns become more popular, utility poles gave way to pressure treated rounded lumber and also square posts that are more suited to being buried in the ground. Pole barn nails were developed specifically to be used for – you guessed it – building pole barns.

Today’s pole barns still share much in common with their ancestors. But there are 2 noticeable characteristics that made for big changes in their value and versatility.

The first was the increased availability of concrete. The cost continued to decrease, as well. Solid concrete slab foundations for pole barns ultimately went from being an unaffordable luxury to a common necessity.

The main vertical support poles were buried in the ground, and the cement foundation was poured around them. It still left the challenge of compensating for the line of vertical poles needed to support the roof frame structure and the in getting everything up and straight.

The second improvement created a sweeping change. In the early 1950s Carroll Sanford designed and patented the first wood roof truss. This combination of plywood metal and screws used considerably less material than the traditional wood framing for roofs, so it was lighter. It needed less support. The truss system was so efficient with its support that it allowed for clear spanning between the perimeter walls. – not clear-span like what most of us think about today through a clear span truss with its open cathedral like ceiling, but it was the humble beginnings that made it all possible – what a breakthrough.

Those center support poles were no longer needed with the new design.

Not Your Father’s Pole Barn

Newer and more practical materials have kept the pole barn relevant. Today, the exterior walls are often made of enameled steel secured with color-matched screws. Rubber washers make it a more weatherproof assembly.

Those center poles that once were a main contributor to the pole barn’s name may be gone, but nobody is interested in changing the name. The addition of the newly invented truss was a game-changer. Wider Clear spans made pole barns even more practical for agricultural use, as farm equipment continued to grow in size.

Our steel building agricultural kits pay homage to the pole barn. We’ve taken everything good about their simple, but sturdy design and come up with a steel + wood version. It’s strong and flexible, with an open ceiling clear-span web steel truss that comes in just 4 bolt-together pieces – thats right, steel for legs in place wood posts. Our buildings use wood for flexibility, rather than for the main supports. That’s a job better accomplished by steel. Edge mounted wood roof purlins and sidewall cross beams (Girts) make it easy to attach and finish the inside ceiling and walls off and to make improvements – as opposed to flat-mounting the boards in the old way. And on 2’ centers too!

Contact us once you’ve got the all-important building code requirements for your area. We’ll introduce you to a building concept rich in almost 100 years of tradition, engineered and built with today’s best materials…to stand the tests of today, tomorrow and beyond.